Just two and a half years ago, he was living in a homeless shelter. Then, he found the Morris Burner Hostel. I sat down with OB1 Shinobi, to learn more about Burning Man culture, the lifestyle, and how it changed his life.

A Pop-up City in the Desert

These are some of the ten principles of Burning Man, a festival that takes place every year in the Black Rock desert, just 124 miles north of Reno, Nevada.

Approximately 70,000 people from around the world gather for this festival, living in a temporary 7 square-mile metropolis called Black Rock City. Once you’ve attended, you’re named a Burner. The city is dedicated to art, community, self-reliance, and self-expression. For two weeks Burners brave the elements, including violent dust storms and harsh sun exposure. Attendees can decide to camp in tents and RV’s on the playa in the Black Rock Desert and partake in festivities happening 24-hours a day. After the ceremonious burn of a 75-foot tall wooden man closing night, the city packs up, and residents return to normal life.

Hidden in the Heart of the City, a Mini Playa

For a select few, Burning Man doesn’t end after the burning of the wooden effigy. At the Morris Burner Hostel in Reno, people live the Burning Man lifestyle 365 days a year. The hostel hosts 15-18 full time residents in art-themed rooms, including the Treehouse, the Cuban Coffee Room and the Fourth Dimension, to name a few.

“It allows you to use that creativity to better yourself, so you can actually help better other people, because people learn from example,”  Shinobi said.

Like Burning Man, the Morris prides itself on spontaneity, which means residents never really know what to expect when they walk through the door.

“The Morris is interesting all the time…Sometimes we get quiet at night, and sometimes, that’s just when things get exciting,” said Gemini, the hostel manager.

In 2015, OB1 Shinobi, a vacuum salesman from Oregon, found himself homeless in Reno, Nevada. The 35-year-old had lost all forms of identification, and had no way of getting a job. That is, until he stumbled upon Burning Man culture at the Morris Burner Hostel.

Typically, attending Burning Man is the ticket into the Morris, for Shinobi it was just the opposite. During his first few weeks, he was invited to work at the Generator, a community art work space, in Sparks, Nevada by another member.

“He was like, ‘Everybody can use somebody that can push a broom, if you just want to help, then come through,’” Shinobi recalled. “So I came by and I started pushing a broom, and the lead carpenter was like ‘Wait a minute, what else can you do?’” Shinobi said.

The lead carpenter gave him a cut list, showed him how to do it, and was impressed at Shinobi’s inherent carpenter skills. After that, Shinobi was on the crew and was invited to his first Burning Man.

By then, Shinobi says, 75 percent of the restoration crew, which cleans up the playa after the festival, had referred him to the lead and co-lead. When the crew finished taking down their project, the lead carpenter took Shinobi to the superintendent of Burning Man, who wanted to hire him on.

“He was like, ‘So you’re the badass I’ve been hearing about,’ and I was like ‘What, wait, no-no-no,’ and he was like ‘So are you ready for your interview?’ How do you get an interview without applying for a job? That doesn’t make sense,” Shinobi said.

Two and a half years later, Shinobi is employed as a carpenter for Burning Man’s most iconic art piece, the Man. Shinobi felt that he was finally seen for who he was.

“I’ve always worked this hard my entire life, and now that people appreciate it, it’s unreal,” Shinobi said. “It’s like a dream every single day. Imagine waking up in a fantasy that is actually real, like you can physically touch it. You can manifest anything you can possibly think of. It’s possible when you allow yourself to make it happen,” Shinobi said. 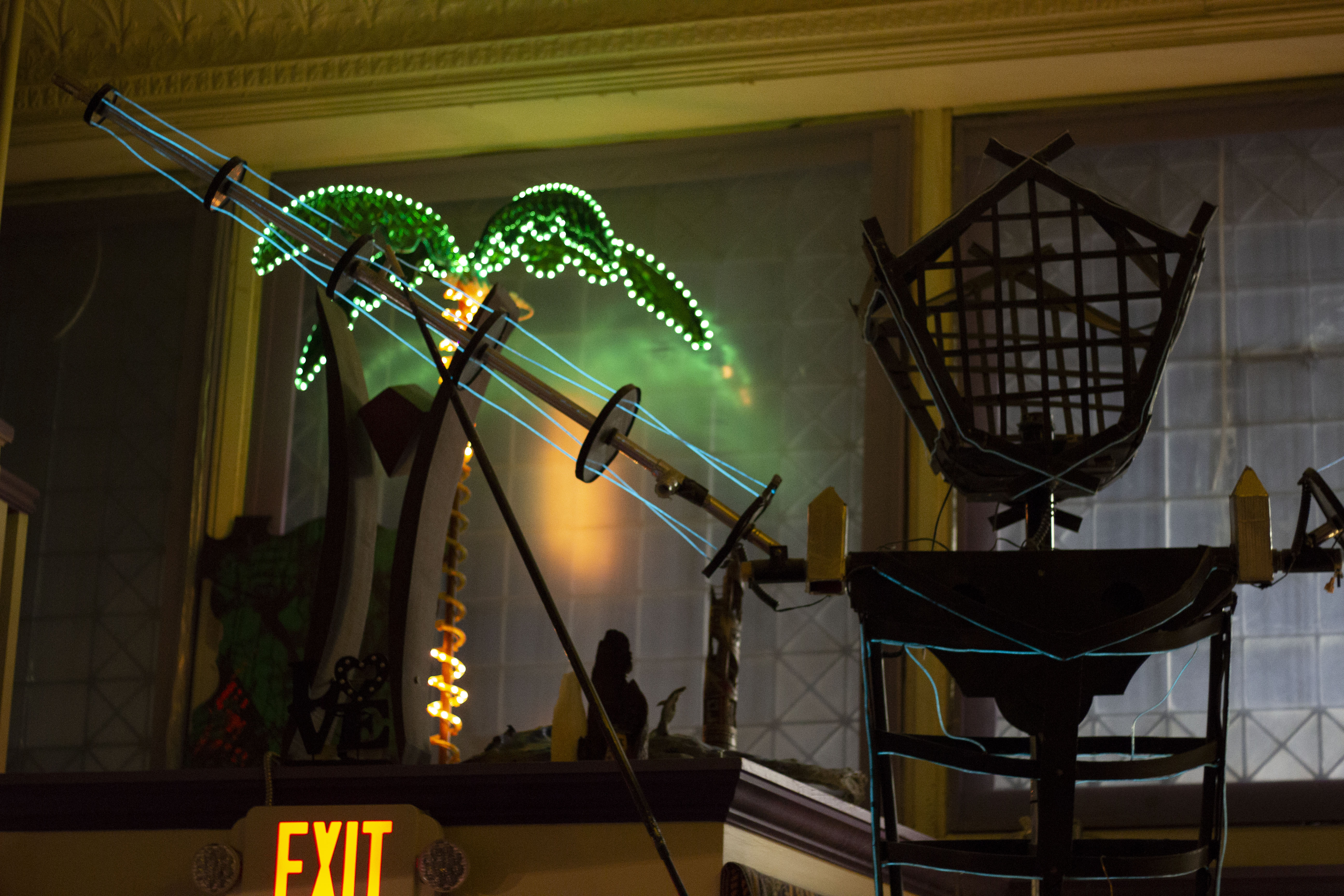 The Morris Burner Hostel is filled with props, costumes and artwork from Burning Man, including this miniature “Man.” Photo: Taylor Caldwell/Next Generation Radio 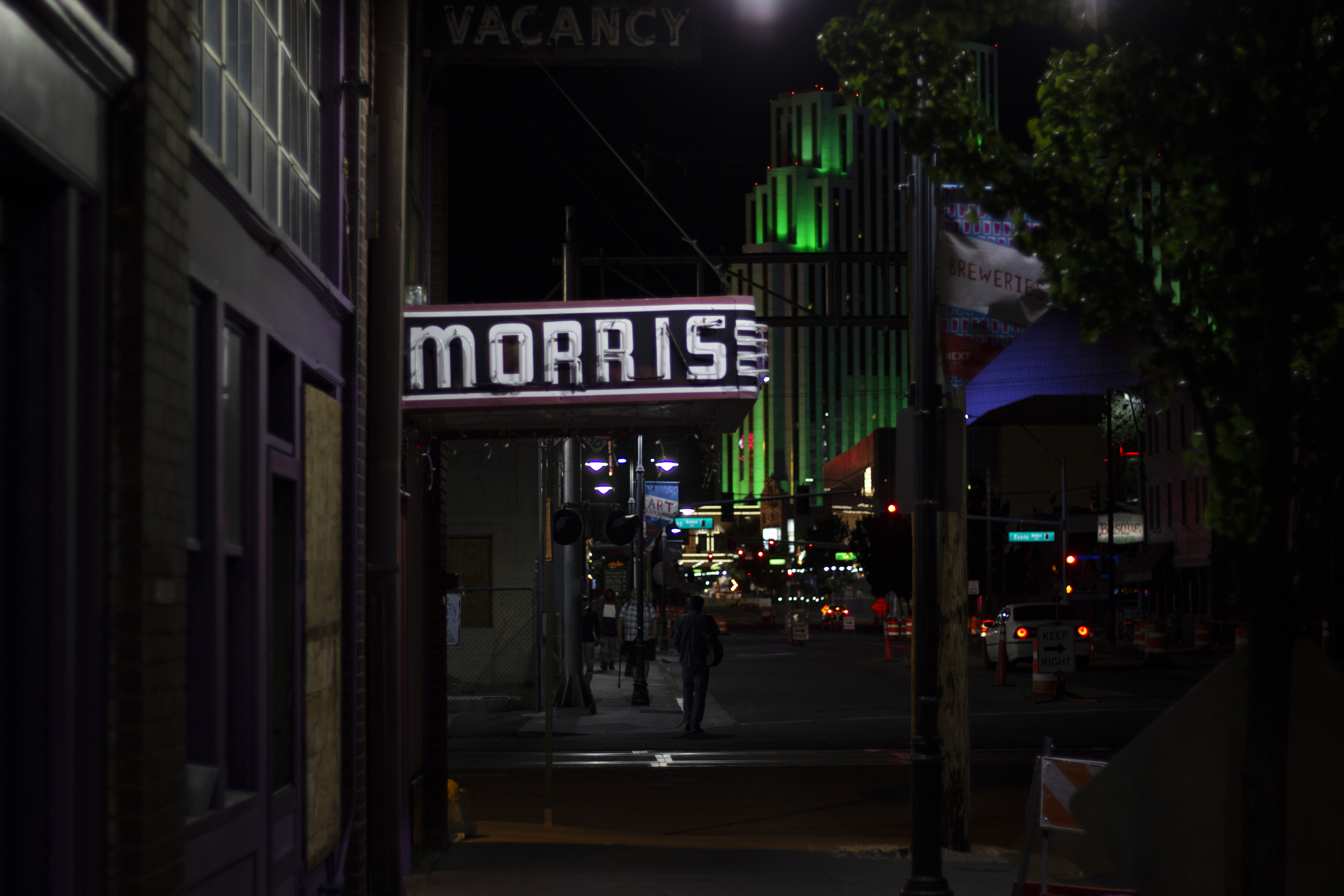 The Morris Burner Hostel is on the corner of Fourth and Record Street, in front of the homeless shelter where Shinobi was staying. Photo: Taylor Caldwell/Next Generation Radio 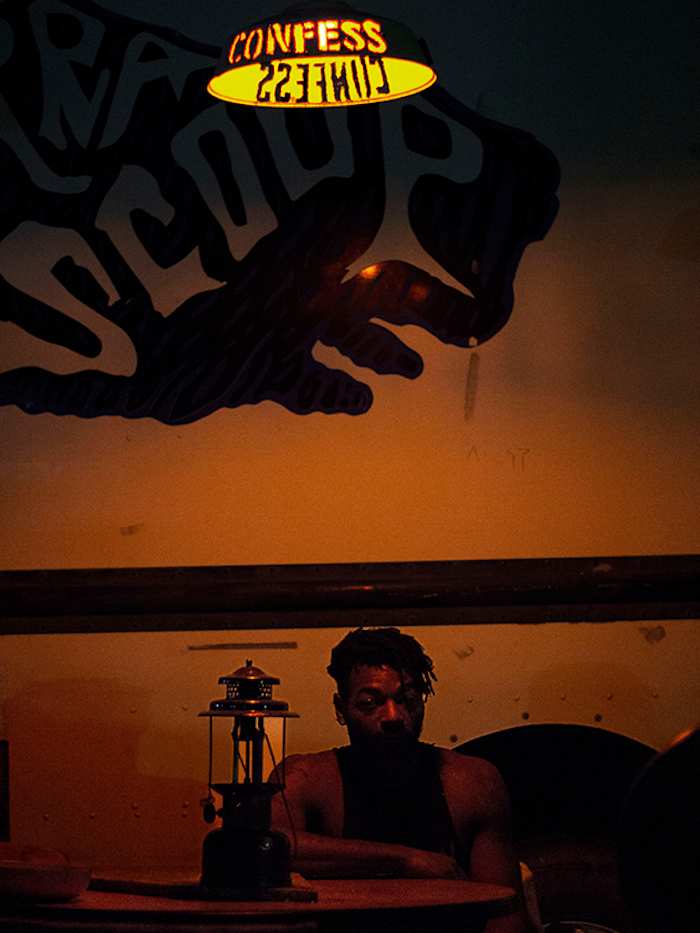 As drumming and hula hooping proceed inside, Shinobi takes a smoke break in the backyard behind a delivery truck. Photo: Taylor Caldwell/Next Generation Radio 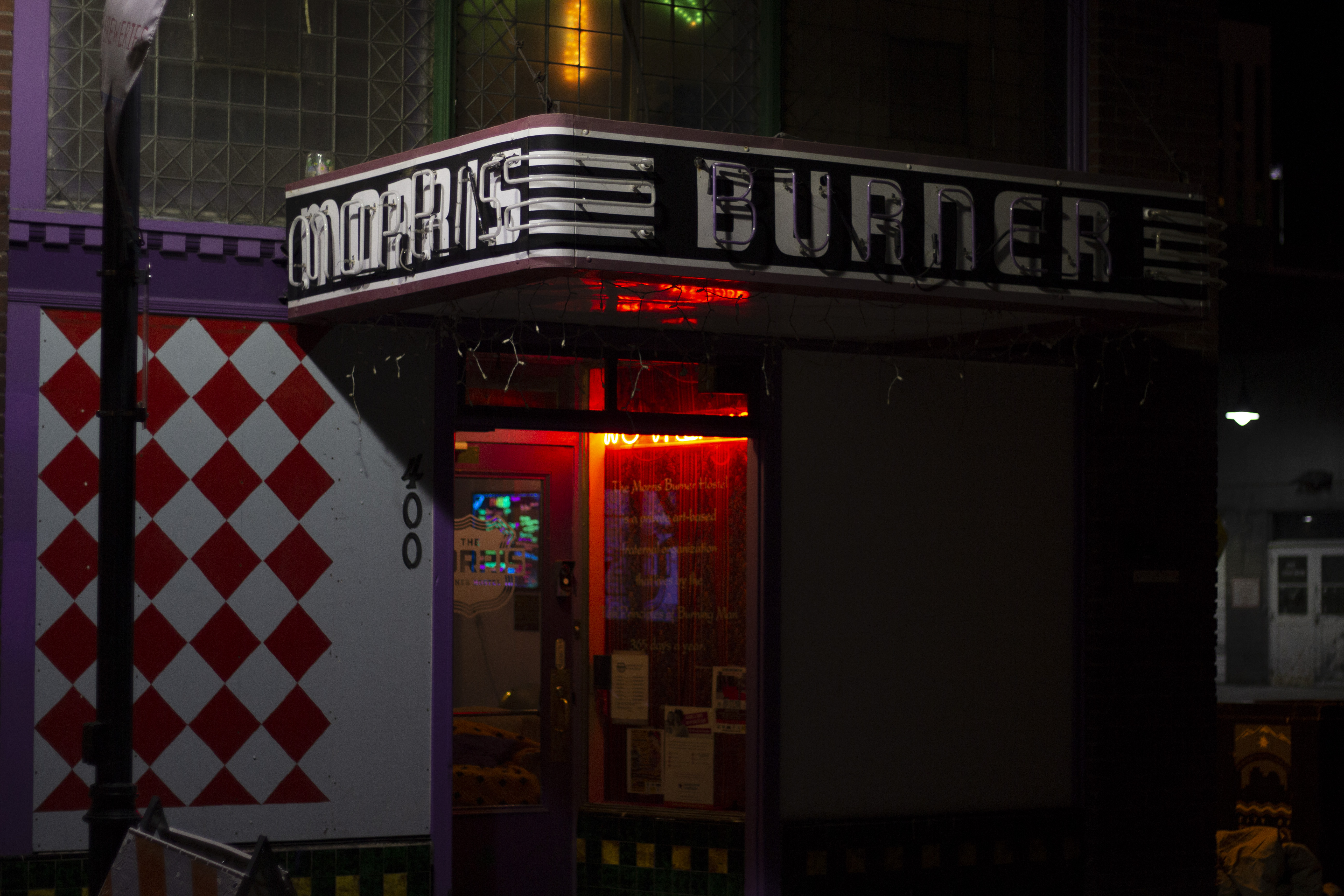 Burning Man’s Ten Principles are posted on the front window of the Morris Burner Hostel, which are at the core of its mission. Photo: Taylor Caldwell/Next Generation Radio