Before interviewing Liz Jane about working at the Tesla Gigafactory, I knew that factory work wasn’t something that many people enjoy doing. But what I wasn’t expecting was to hear Jane’s passion for the company, as well as to hear her goals beyond working at the factory.

Interview with a Tesla Gigafactory employee

It’s about 5:30 p.m. and Liz Jane, dressed in plaid and steel toe boots, is going into her car to pick up some of her friends, all of them recent hires at one of the biggest and most secretive buildings in the world.

Even though the bumper to her car is broken and falling off, her friends still chose her to drive since her car gets the best gas mileage. The only downside for them is that Jane loves to play country music and they hate it. But since she drives, she gets to pick the music.

After Jane strategically picks up three of her friends, depending on who is closest to her or the factory, she and her friends head off to work. The drive is about 35 minutes east from Reno which gives the friends enough time to pump each other up and prepare for the long 12-hour shift.

A 12-Hour Night Shift at the Gigafactory

In working at Tesla, Jane does not have to wear a specific uniform, but she does have to follow a dress code that is set in place. “What I’m wearing right now is steel toe shoes. That’s for safety because we are working around big machines and things fall,” she said. She also has to wear jeans and likes to wear an overshirt, such as a flannel, to have some extra protection. “I bruise really easily so like when I’m lifting heavy totes, because you are lifting a lot of weight all the time carrying these parts from different machines.”

During the night, Jane works on two seperate machines. One of the machines that she works on will cut out the parts that go into the cooling unit of Tesla cars. The other machine that Jane works on paints flux onto those parts so they can be easily melted together.

Her overnight shift starts at seven at night and ends at seven in the morning. She gets her first 15 minute break at 9 p.m. and her lunch at midnight, which is 30 minutes long. Her final break is at 4 a.m. and is also a 15 minute break. During the lunch break, Tesla workers are able to go to the cafeteria and get food, where there is a buffet bar, a snack bar, as well as some soda fountains and, “really bad chopsticks,” according to Jane. But, to make up for the bad chopsticks, she says everything that Tesla workers use inside of the factory is decomposable, including the forks, plates, and cups. “They make sure everything about the factory is as green as possible,” she said.

At the end of the shift Jane and her friends drive home either in dead silence, defeated by the numbing night, or in loud banter, letting their frustrations out from the shift. Even though they are exhausted from working for so long, they always follow through on their tradition to go to breakfast together at least once a week.

Not a Dream Job Yet

While working at Tesla may not be the dream job that Jane envisioned, she still really enjoys working there. A lot of people, after they work at a job for a while, start to hate the company that they work for, for various reasons. But to Jane, “it’s nice to like feel like you’re helping because their end goal is to, you know, have renewable energy and be better for the environment.” Jane makes $18 an hour, which isn’t enough yet to afford the electric cars she is working on, she still hopes that she can afford and drive a Tesla some day.

Of course working at the hi-tech energy company isn’t the end goal for Jane, but she says it is a step in the right direction. Jane is doing what she can to save up money so that she can go to the University of Nevada, Reno, to become a physician’s assistant. “It’s not the most orthodox way. Most people who live in Vegas, you know, go to UNR and live in the dorms and everything, but I think I’ve done it the best way I can,” Jane says. 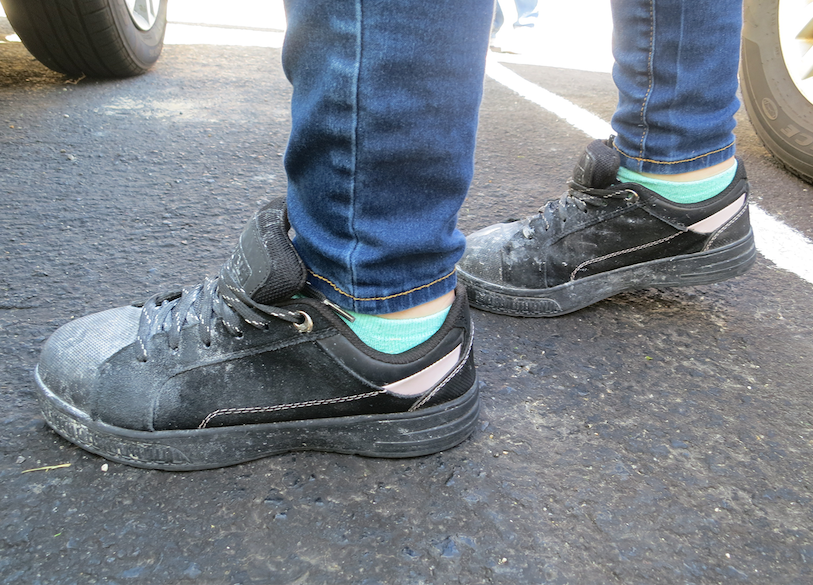 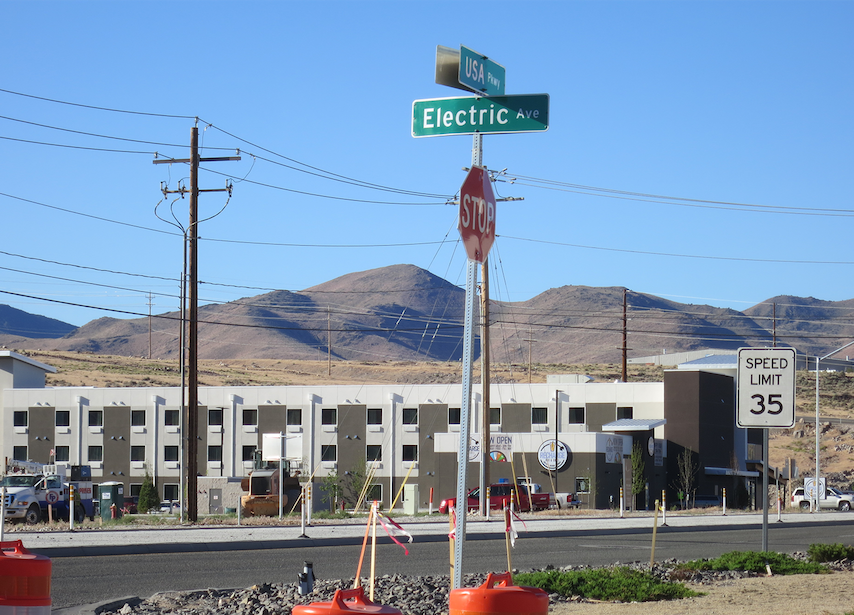 At the corner of USA Parkway and Electric Avenue, the closest that we could get to the Gigafactory before having to turn around at the entrance. Photo: Nico Colombant/Next Generation Radio 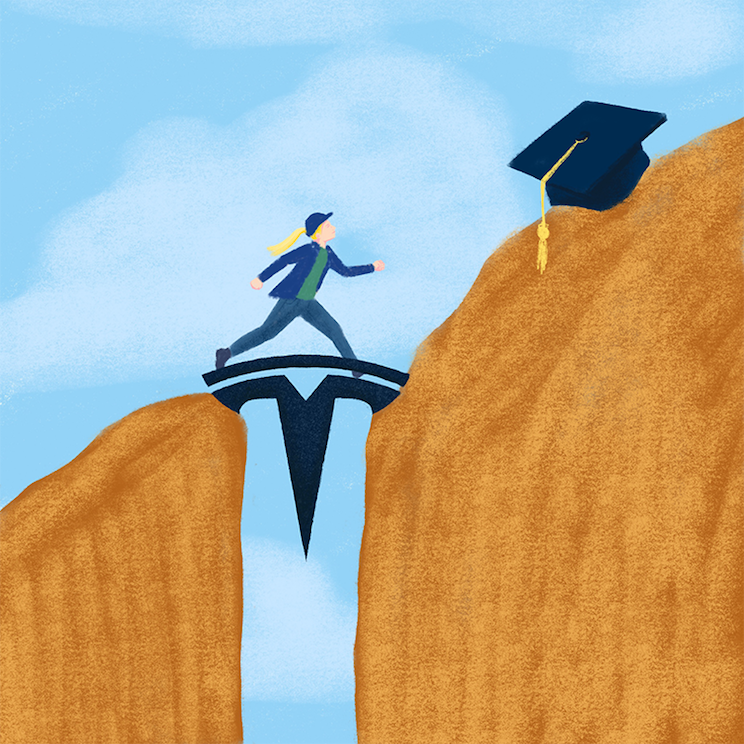 Liz Jane hikes up a mountain, progressing to her goal of going back to school through working at the Tesla Gigafactory. Illustration by Sylvia Li/Next Generation Radio